The Cathcart Circle Lines form a suburban railway route linking Glasgow (Central) to Cathcart via a circular line, with branches to Newton and Neilston, on the south bank of the River Clyde. They are part of the Strathclyde Partnership for Transport network.

The lines were built by the Cathcart District Railway (Cathcart Circle) and the Lanarkshire and Ayrshire Railway (Newton and Neilston lines). The first part opened on 1 March 1886 as a double line from Glasgow Central to Mount Florida then single to Cathcart, doubled on 26 May 1886. The circular route back to Central station via Shawlands and Maxwell Park was completed on 2 April 1894.

The Newton and Neilston branches were built to provide a through route from the Lanarkshire coalfields to ports such as Ardrossan on the Ayrshire coast. There is still a junction with other lines at Newton, but the track beyond Neilston has been lifted.

The lines originally carried significant amounts of freight, but commuter trains are the only regular users now. Football specials sometimes run to Mount Florida and King's Park for major matches at Hampden Park.

When the lines were built much of the land around them was open countryside. The existence of a commuter railway was a major factor in the development of Glasgow's southern suburbs.

On weekdays the services have provided a vital transport link for school pupils and college students at nearby schools and higher education establishments, contributing to passenger numbers on top of the commuter traffic.

The lines under British Railways were electrified on Monday 28 May 1962 at the standard 25 kV AC, but originally 6.25 kV between Pollokshields East and Mount Florida because of limited clearances. The "Blue Trains", 303 units, which had dual voltage capability, replaced steam trains and early diesel units.

There was a trial run on the previous day, and over 5,500 passengers were reported as using the new trains in their first morning rush hour.

The lines comprise the following lines:

Built by the Cathcart District Railway.

Built by the Lanarkshire and Ayrshire Railway. Diverges from the Circle via a dive under junction south of Mount Florida and at Cathcart South Junction (south of Cathcart). The link at Cathcart South junction was put in place during electrification.

Built by the L&AR. Diverges from the Circle at Cathcart.

Round the west side of the Circle onto the L&AR lines eastbound, terminating at Kirkhill. East side services ran to Newton, with many extended to Motherwell via the Clydesdale Junction Railway.

This included the Hamilton Circle and resulted in east side services terminating at Newton. Peak services from east and west sides operated to Motherwell via Blantyre and Hamilton.

The major change being the extension of west side services from Kirkhill to Newton.

Until May 1984 there were four trains an hour on the Newton branch (two via Maxwell Park and two via Queen's Park) and two trains an hour in each direction around the Circle, in addition to the services on the Neilston branch. From May 1984, both the Newton and Neilston services remained 2 per hour, none turned back at Kirkhill and only one ran the full circle each way.

Services were operated by First ScotRail, with most services using 314 electric multiple units, although Class 318s and Class 334s (Juniper units) made occasional appearances on the line.

This frequency gives a 30-minute service on the west side of the Circle, Neilston and Newton branches, three trains per hour at Cathcart and four trains per hour between Glasgow Central and Mount Florida. These service levels are less than those of the 1960s.

At peak times the above services combine to have trains running approximately every 5–10 minutes between Glasgow Central and Cathcart, where line capacity permits. Several trains are formed of the maximum six cars at these times. Commuter levels on this line are quite high and therefore a high density service is required at such busy periods. 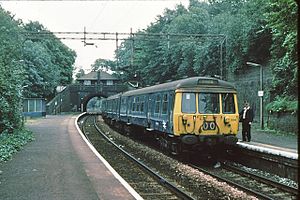 The Template:Brc "Blue Trains" (pictured at Kirkhill railway station) were introduced on the Cathcart Circle upon electrification, surviving until 2002.

Upon electrification in 1962, Class 303s. Following electrification of the Inverclyde Line in 1967, Class 311 units were also used. Following the introduction of the Class 318 in 1986, they made occasional trips onto the Circle. The Class 311 were withdrawn in 1999, and following the introduction of the 334 the Class 303 were withdrawn in 2002 and a major redeployment of the fleet took place, resulting in the Class 314s taking over the line, supplemented occasionally by Classes 318 and 334.

In 2014 Class 314s primarily operate the Circle (including Newton, Neilston services). During peak hours Class 380s are also used, on the Circle route only.

There have also been proposals to convert the lines to light rail, but never beyond the initial suggestion stage. Most recently, in December 2008 Transport Scotland's Strategic Transport Projects Review suggested an upgrade of the Circle to light rail as part of a wider light rail network for Glasgow, incorporating both new lines and re-purposed older alignments. If taken forward, this proposal would be implemented during the period 2012 - 2022, in line with the scope of the strategic review.