The NCN on OpenStreetMap

The first section of the NCN to be built was the Bristol & Bath Railway Path, opened in 1984 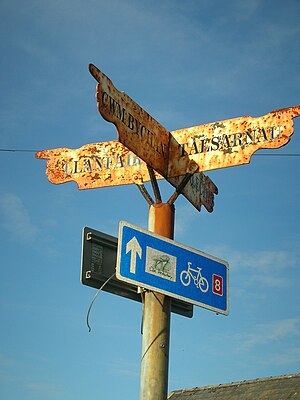 The National Cycle Network (NCN) is the national cycling route network of the United Kingdom, which was established to encourage cycling throughout Britain, as well as for the purposes of bicycle touring. It was created by the charity Sustrans who were aided by a £42.5 million National Lottery grant. In 2005 it was used for over 230 million trips.

Little of the NCN is on dedicated bike paths. Though many routes try to minimise contact with motor traffic, 70% of them are on roads. The NCN uses pedestrian routes, disused railways, minor roads, canal towpaths and traffic-calmed routes in towns and cities.

The opening of the Bristol and Bath Railway Path (now part of National Route 4) in 1984, a 15-mile cycleway following a railway no longer in use, was the first part of the NCN.

NCN routes beginning with numbers 1 to 6 are generally in England, the routes that begin with a 7 start in the far north of England and Scotland, with 8 are generally in Wales, and 9 in Northern Ireland. The main routes have one digit (1 to 6 radiate clockwise from the south of England); other routes have two digits, starting with the number of the relevant main route.

There are also many regional routes, reaching smaller towns and cities within ten designated regions. Each region is divided into a maximum of nine areas. Regional route numbers comprise the area number 1 to 9 followed by another digit. (An exception is in the Scottish Borders council area, where regional routes are numbered 1 to 9.) This means that across the UK there could be 10 regional route 12s, for instance, as well as the national route 12. To reduce confusion, identically numbered areas in adjacent regions do not abut, and routes with the same number are widely separated.

In 2009 regional routes were being renumbered with 3-digit national numbers.

Routes are occasionally numbered to match the motorways and major roads that connect the same destinations; examples include NCN Route 62, which by connecting the two sides of the Pennines mirrors the M62 motorway. 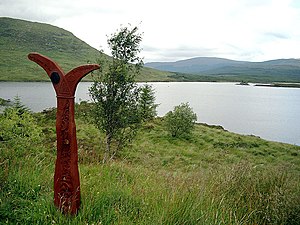 One thousand "Millennium Mileposts" made from cast iron were funded by the Royal Bank of Scotland to mark the creation of the National Cycle Network, and these are found along the NCN routes throughout the UK.

There are four different types: "Fossil Tree" (designed by John Mills), "The Cockerill" (designed by Iain McColl), "Rowe Type" (designed by Andrew Rowe), and "Tracks" (designed by David Dudgeon). The four artists are from each country of the UK, though all posts can be found in all four countries.

Most mileposts contain a disk featuring symbols and text in code. There are 60 different designs, spread across the country. They form part of the Millennium Time Trail, a treasure hunt puzzle created by Sustrans in 2001.

<poem>The Verse held within the coded text is:Template:Fact MEASURE EVERY HEARTBEAT TO COUNT OUT OUR LIFE'S SCORE/ IS "TIME TO ESCAPE" MEANT TO FIRE OUR COMING AGE?/ LOCKED IN SEASONS' BARS SWINGS PENDULUM'S CEASELESS CLAY/ LUNGS NEVER FULL ENSNARE US IN TIME'S EIGHT PIECE CAGE/ ENTROPY'S AIM SHOOTS LEPTONS IN DANCING CYCLES OF LIGHT/ NATIONS REACH OUT IN HOPE ACROSS TIME ZONES AND LONG DEGREES/ NO CORNERS TO HIDE US, EARTH’S SHADE SPINS HOURLY ROUND TONIGHT/ IN ALL MIND-STREAMS WE WADE, OUR WORLD-LINES WEAVE PAST TAPESTRIES/ UNCERTAIN DREAMS EVOLVE IN THE STRUGGLE FOR THE “WHY?”/ MUST IN ALL THESE TIDES OF FAITH, FLOW STILL SUCH WAVES OF FEARS?/ PLACE AND TIME TEMPT FATES, BUT ALL LIFE’S NATURE IS TO DIE/ OUR ERA, STARS, BOWS OUT, PLAYING ITS MUSICAL SPHERES/ EVERY GAINED UTOPIAN GOAL MAKES US MANIFOLD TIME’S TREASURE/ MAPPED OUT, AS ABOVE SO BELOW, NERGAL TICKS OFF TIME’S MEASURE/// </poem>